A while ago I got a recommendation to look into a Raspbee (from dresden elektronik) as Zigbee gateway. That looked like fun, therefore I ordered one of the devices. The first step is the installation of the Pi itself and then the software for the Raspbee.

For various reasons I decided to use a dedicated Pi for this, and don't install this on the openHAB Pi already running here:

The start for this adventure was the base installation for the Pi. I'm using Raspbian, which currently is based on Debian Buster. After a couple of first steps, I have a system which I can install further using an existing Ansible Playbook. For this device I don't need Wi-Fi, it's connected using a short cable to the switch in my shelf where all the other hardware sits.

For most of my devices and servers I have a "common" Playbook which sets up a couple of basic settings, and installs software I would like to have on every device.

After this was out of the way, I did shutdown the Pi, and plugged in the Raspbee gateway. The Raspbee comes with a Real-Time-Clock (RTC), which is battery buffered. Needs a SR416SW battery, but because I sync the Pi to the time server I have in my network, I don't need this feature. The board is using GPIO pins 1-12, that are the first 6 rows from the outer end (not the side with the USB ports). Make sure the board is installed the correct way: it must go over the Pi, not to the outside. 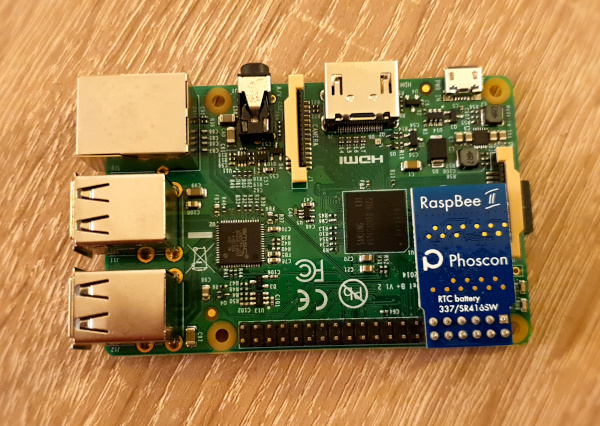 Now it is time to look into the installation instructions for the Raspbee. I decided to pour all the required steps into another Ansible Playbook - got mad rebooting the Pi every so often to figure out the kernel module installation.

Link to the Playbook

The Playbook installs the kernel module, installs the extra repository and installs the deCONZ software. Then everything is switched from the GUI tool to the headless installation. Couple reboots required along the way.

The last step is configuring the gateway, which happens by visiting the "app link". The setup asks for a strong password for the gateway, and then allows to add new devices.