Nevertheless I had an idea, but for this I had to wait until the poll closes. 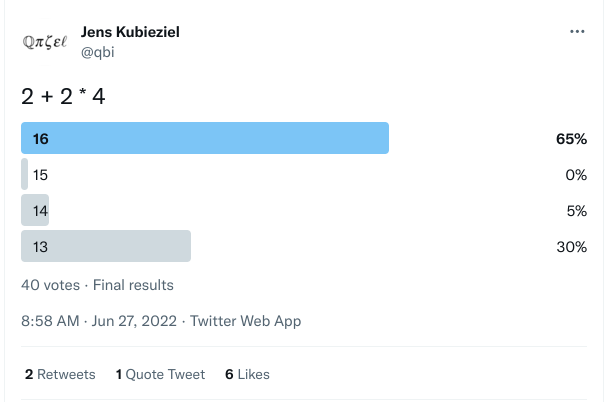 My idea wouldn't have been easy with every of the available options, but the final poll result of 16 made it relatively easy. This answer is the result if you ignore (forget, blame your math teacher) the order of operations in mathematics. But this blog posting and this answer would not be much fun. Instead I use PostgreSQL to bend my answer to the result of the poll.

How to approach this

There are a couple options, like working on the order of operations. But this is already some work. This specific example works also if you multiply 2 and 2, instead of adding them: 2 * 2 * 4 = 16. All I have to do is overload the + operator to multiply instead. After all, it's just bending the database to the expected result.

First I need to find the correct operator definition in the catalog. PostgreSQL interprets the 2 and 4 as integers, therefore I need the + operator for where the left and right argument is an integer:

As we can see, the actual function doing this operation is int4pl. Let's look at the operator for *:

The function used here is int4mul.

So how about just defining a new operator for +, but using int4mul?

There are two ways to do this: I'm defining a new operator, which lives in the public schema (or any other schema I specify). I could also just update the operator in pg_catalog. And I'm using a separate database: in case I screw up the catalog, I can just drop everything and start over. Don't do this in your default or production database!

What I have to do is:

Then I can run my query:

It's easy to bend PostgreSQL to your expected results, even if they are mathematically wrong. My answer on the original Tweet caused some discussion and guessing.

The problem is a bit more real, because one can do this:

Now the operator I created (and any other operator in public) overloads the operators in pg_catalog. PostgreSQL fixes this problem with public by updating the permissions for the public schema in version 15 of the database. If people have write access to the DB, they can still overload even simple operators like + and * and then return unexpected results for everyone. Or return expected but slightly false results.

Neat blog post! A few questions: 1. Is it possible to define custom operator precedence in Postgres, or is this hard-coded? 2. What were the people smoking who chose 14 and 13 as answers... and is it possible to hack Postgres to produce any of those results...?
Comments ()
For your question 1: I was looking into that, but could not figure out how to do that. I'm sure it's possible somehow. For question 2: I have no clue. But maybe they should smoke more, because clearly the current amount is not enough.
Comments ()