SimCity BuildIt is a remake of SimCity 2013 for Android and iOS, however with many differences in the game play. After seing it in the Android Play Store, I've downloaded it and played it for a few days - and then deleted it, because the game is an attention whore.

You will buy your copy of SimCity 2013, but the iOS and Android versions are for free. Or so you think. But make no mistake, you won't get very far if you do not spend real money on the game, even if you play it all the time.

In the original SimCity series, you are the major of your city, and you take care of all aspects: roads, buildings, taxes, fire stations, water, parks, in short: everything. But one of the goals of the game series is to let you focus on growing your city. Like in real life, as a major of a big city you don't care (and you don't have time for it) about the minor details of everydays operations. Otherwise called micromanagement, it's a great way to lose yourself in the gory details of a job and you never will find a chance to focus on the great things. In the previous SimCity versions (at least the ones I've played), you build roads, houses, energy stations, and then you come back if there is a problem or you want to change something. That's how it is supposed to be, and you have time to focus on other parts of your city. Life goes on.

In SimCity BuildIt you are the master of micromanagement. Every single factory wants your constant attention. Every item produced you need to acknowledge it, so it can be transfered into the city storage. And then you have to decide what the factory line will produce next. It's not like you can say: "Let's do plastics until I tell otherwise" - you have to confirm that the factory will build 3 items plastic. Then you have to confirm that production is finished. And then you have to decide what will be produced next. Almost like in-time production, except that you need to remember what your city needs, at any time. Same with buildings: you as lord mayor have to ensure that all required materials for every single house expansion are available, and then you also have to approve every expansion. 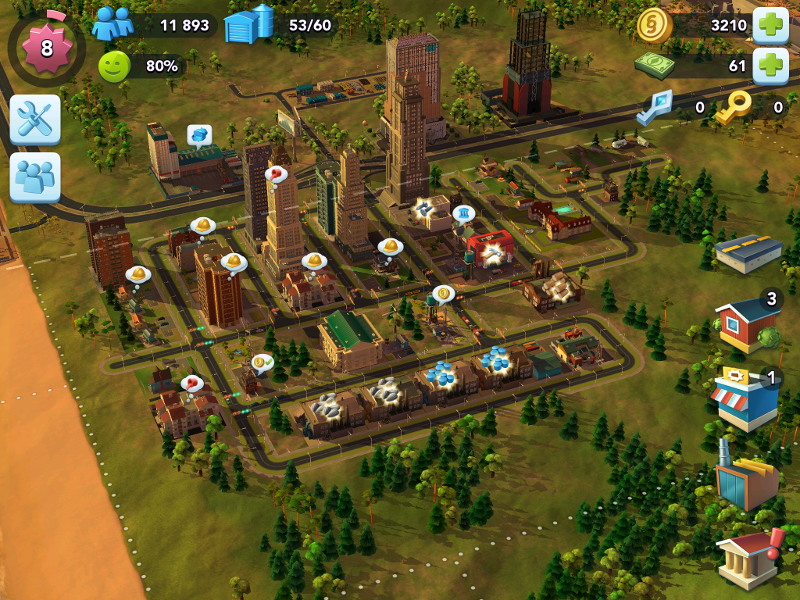 Micromanagement: Everyone wants your attention

Buying items? Selling items? It's your dirty thing to do, because your third job title in this game is sales representative. Again, you have to make every single deal, for a small number items each. And confirm every completed deal in order to collect the money and free the trade slots. 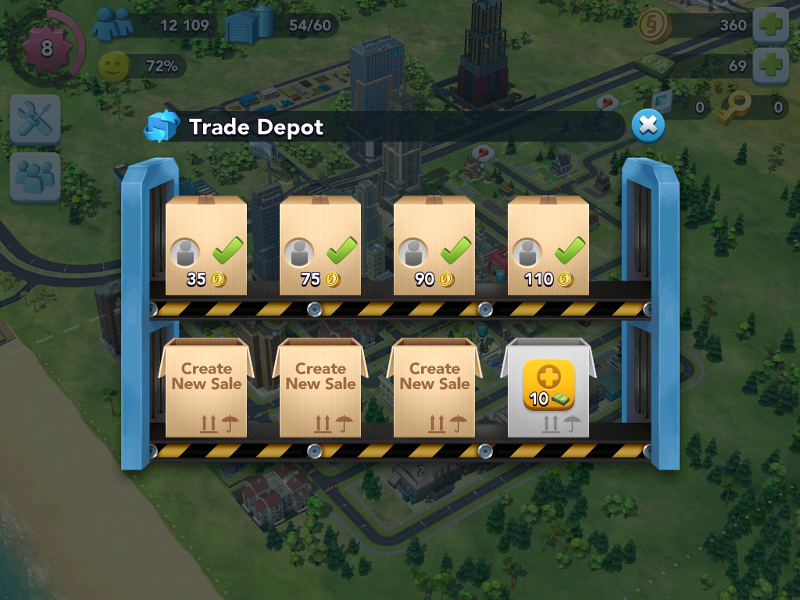 On top of that, the city storage is very small, so you constantly have to deal with your item supply. Either the storage is full and you have to sell items or build something, or you forgot to assign production queues in your factories and you are missing supplies.

Your community members: the game goes to great lengths to ensure that the mayor is listening to every single person in the community. At a high rate the game will pop up speech bubbles, letting you know that one of your precious residents wants to tell you something important. Most of the time it's just nonsense, and the messages repeat themselves. If there is a problem in the area, the message will tell you over and over again - but not that you can do something about it (see below). Very occasionally, such a speech bubble will give you precious items which you need to expand your area, or your city storage. Ignore these bubbles? Well, good luck expanding your area. The game even has a badge which honors the fact that you clicked thounsands of speech bubbles. 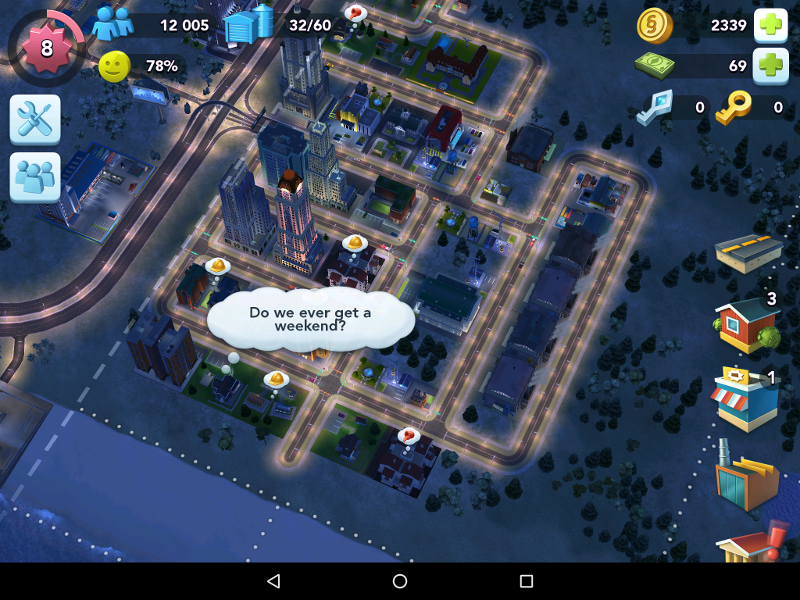 Very important message from one of your citizens 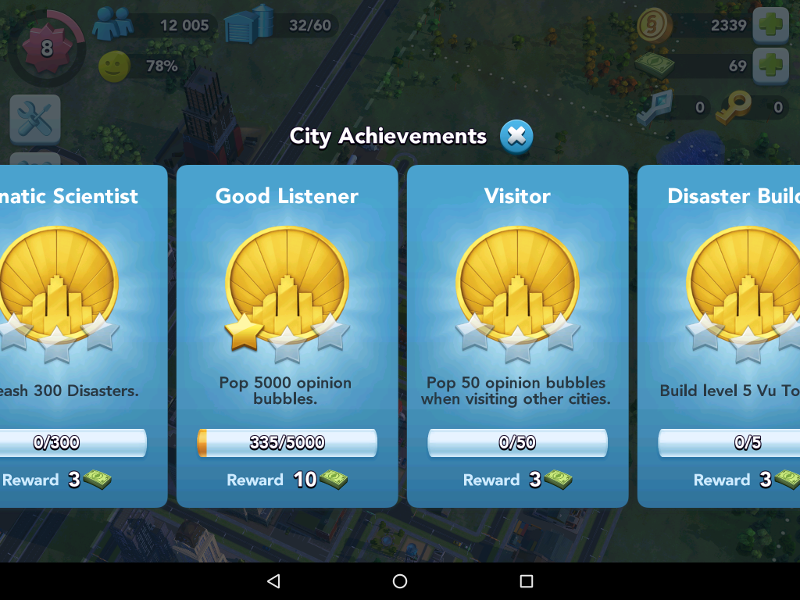 Be a good mayor, get the "Good Listener" badge

As mentioned earlier, the game is free to download from the store. The in-game currency is called "Simoleons", and every building cost a certain amount of this currency. Small fire station or small water plant? 4000 Simoleons. You earn a few Simoleons by selling items which are produced in your factories. Or by expanding houses. And by earning taxes. But most of the time - no, let me rephrase that: all the time - you do not have enough Simoleons to build the next park, the next house or the next energy plant. Of course there is an easy solution for that: you can buy Simoleons for real money. Another currency named SimCash can be bought for real money, and cashed in for Simoleons. The fire station you darely need, because your citizens abandon that building? Worst case it will cost you 2.70€ (4000 Simoleons * smallest pack of 900 Simoleons = 4.5 units, 900 Simoleons cost 30 SimCash, 4.5 units a 30 SimCash - 4.99€ each - makes 2.70€). Or you can buy 8500 SimCash for the respectable sum of 99.99€ ... 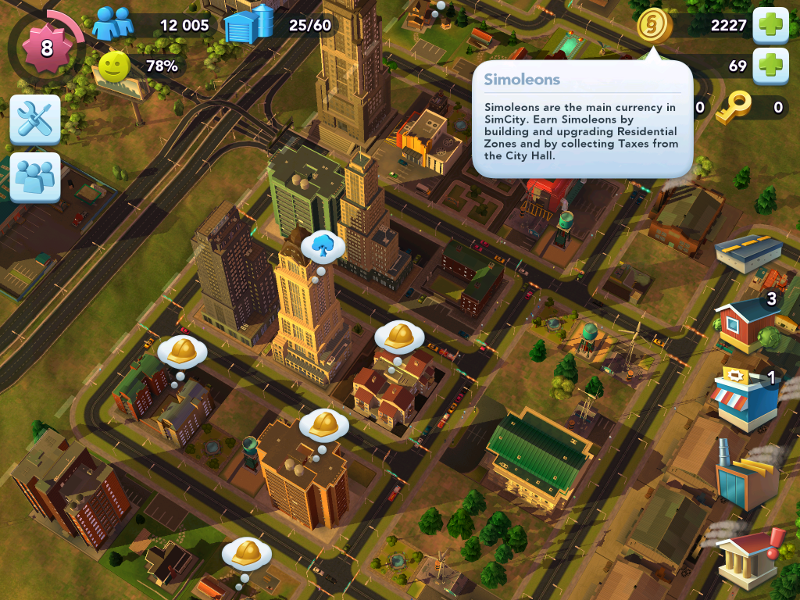 Simoleons is the in-game currency 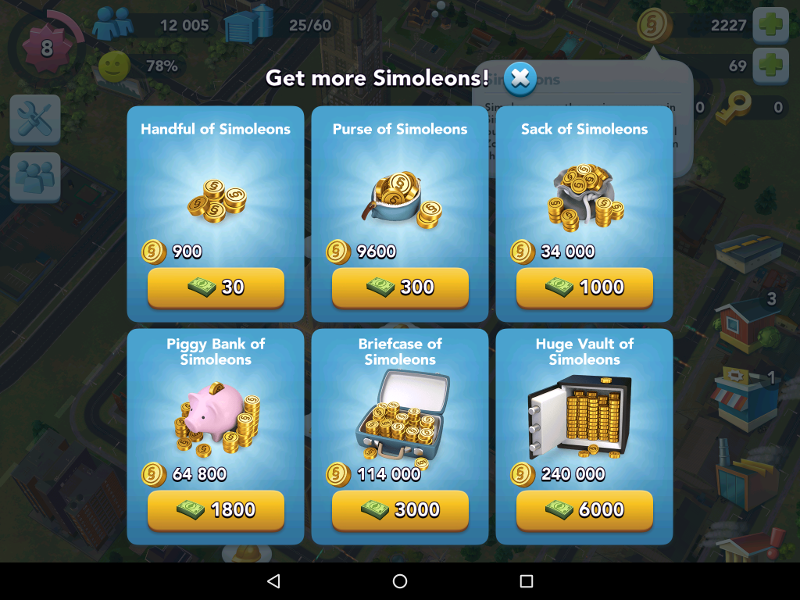 Buy more Simoleons, if you want to speedup the game 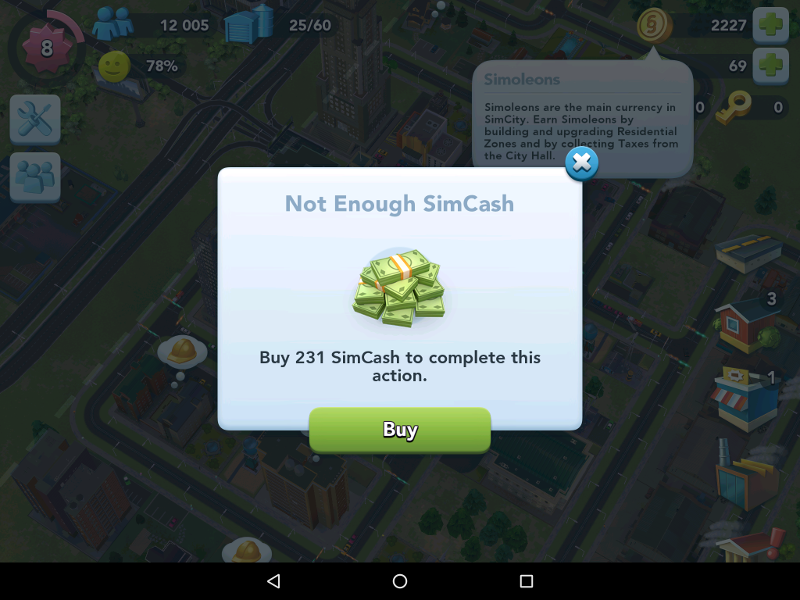 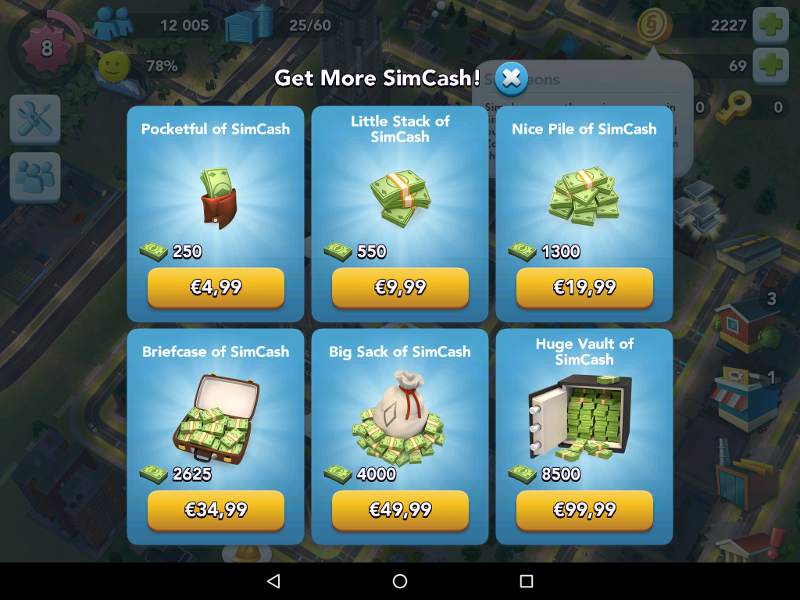 You can buy SimCash with real cash

That is the point where I deinstalled the game. I don't want to spend my time repeating the same tasks over and over again. Micromanagement is good, but micromanagement hell is frustrating. And trying to rob an unspecified amount of money out of my pocket (because I never know how much more SimCash I need to buy to play the game) is just stealing. Freemium pricing model - ok. But if you want money, charge me once and don't try to charge me over and over again (and likely more than the boxed version).

But most important: if the game play of the future is repeating stupid tasks over and over again, I'm not interested at all. Where are the games where you could spend hours creating an awesome city, never to look back at doing the same task twice?