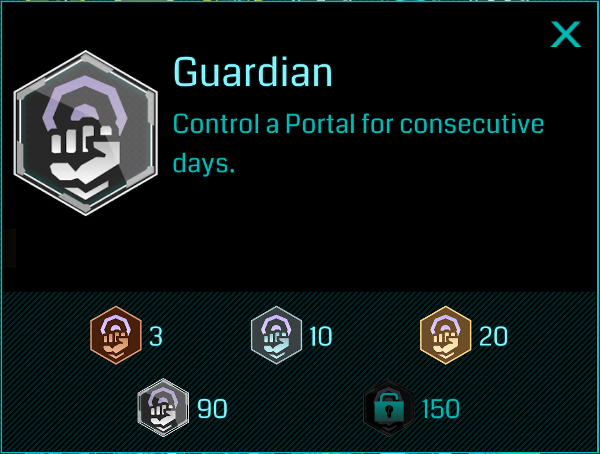 If you haven't heard about Ingress: it is the predecessor of the famous Pokémon Go augmented reality game. If you have seen PGo Pokestops or Arenas - these are all Ingress portals as well. Unlike PGo, which has three factions, there are only two in Ingress: Enlightened and Resistance. Pick your side. Like PGo, it's best played in teams - sometimes in large teams. Hundreds of players can create coordinated field actions, which can even span continents.

Also similarly to PGo, there is a reward program in Ingress. For certain actions you get Ingame-badges. Badges have 5 different levels. Some are easy, at least if you play in a team. The Illuminator badge for creating large fields - easily done in one or two nights, if you cover Berlin with your team. You are playing on your own? Well, that takes a few months. Other badges show your activity in the game. As example, the Trekker badge shows how many kilometers you walked playing the game. That's a nice reward, and a good incentive to go out and play more.

And then two other badges literally show how much of a couch potato you are. The Recharger badge tells how much XM you loaded into decaying portals - that's something you usually do when you sit somewhere and have time. Many active players hit the highest badge level very fast, and many have 5x or even 10x the highest level. Easy peasy. And the most famous Guardian badge tells how many days you did hold a portal, until it either decayed, or the enemy faction destroyed it. This badge is the only one which is not under your control. The badge does not even recognize if you did anything else beyond capturing the portal. All you have to do is capture it, have one resonator in it, sit back and someone has to make sure the portal is recharged. Funny, right? The badge does not show anything about your actual game play. That's why players (in both factions) imposed a rule on themselves to not allow any opposite player the highest level of the Guardian badge. By their very own rule they travel hours and hundreds of kilometers to destroy portals you are holding.

Imagine my joy when I found that out. It's like playing chess: your opponent only has a horse, you have a queen. They can't win the game, but they must be careful with every single move: if they miss one portal, they lose by their own rules. Who am I to not take up that opportunity?

To make things interesting, I assigned two key capsules solely to this game in the game (one key capsule holds 100 portal keys, you need a portal key to recharge the portal). Wherever I go, I find a few remote portals, capture them, gather a key for recharging, and place the portal key in one of the two capsules. At any given time, I have somewhat between 120 and 170 active portals in this two capsules. Given that the Guardian badge is "150 days", the opposing faction has, on average, one portal to take care of on every single day. It's a bit easier for them, because I don't capture portals every day, but still, I spread them out a lot.

After a few months in the game (I did not care about the Guardian badge before), I recently hit 500 destroyed portals. By my estimate, around 50 different agents either found or were tasked to go after my so called Long Time Portals (LTP, or LZP in German). As I said: capture it, gather a key, sit back, and wait. They will spend the time and resources, and while going after my portals, they won't have time to play on their own. And they can't miss even a single portal, by their own rule ;-)

My two Google Keep lists (one per capsule) show that I still (or again) have around 140 active portals. I can't lose - they can't win. So much fun. Let the game continue.