After upgrading Ansible to version 2.8.3, the following deprecation warning appeared many times:

If you search for this problem on GitHub, you find over a 100 Issues, across many different projects. Clearly that hit quite a few people ...

The "main" Issue in the Ansible repository, with quite a long discussion, seems to be #56930.

A dash ("-") is not valid in a Python variable name. A dash however is valid in DNS names, and many people use it in hostnames and group names. Automated systems like GPC or AWS generate such names all the time. And now they are no longer valid in upcoming Ansible versions? Currently this change is set to break every system by default which is using dashes in group names. Good work! 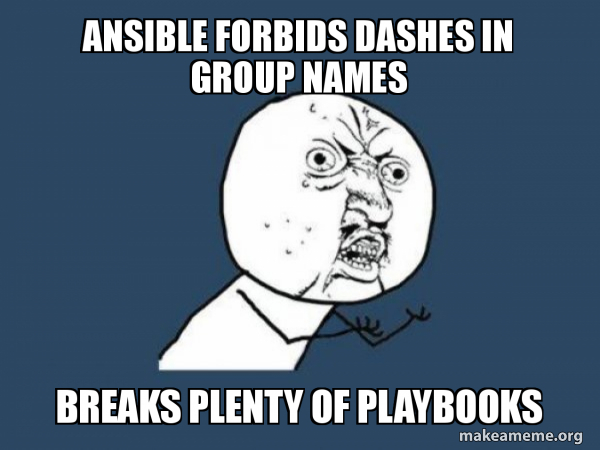 The warning can be hidden by setting the following configuration option in ansible.cfg:

But again: you have to set this option. Otherwise your hosts.cfg will be broken in Ansible 2.10.