FOSDEM 2009 is over and it was a great success!

PostgreSQL shared a developer room together with the *BSD groups and we also had a booth where many visitors passed by and stopped for asking questions or buing some of our merchandising stuff.

Most of us started with our own social event in the Restobières. That's a nice place but it's complicated to lift a buggy into the second floor.

On saturday we started at 11 am, unpacking all boxes and preparing the booth: 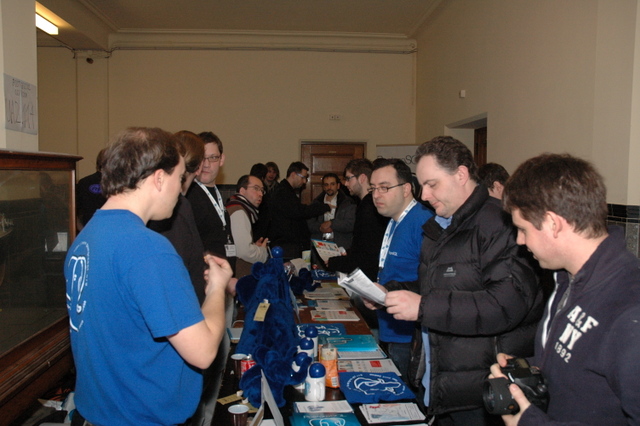 Some well knows faces were helping: 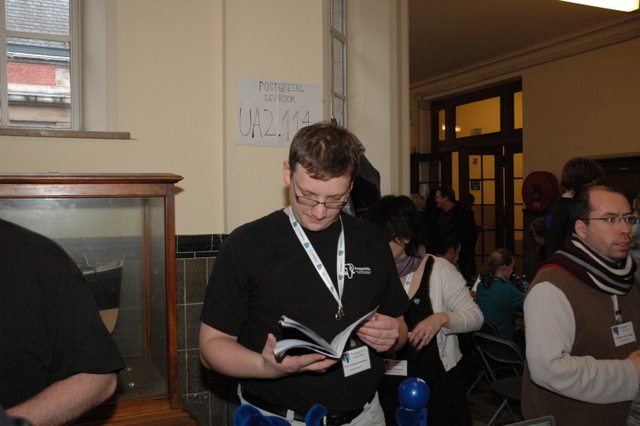 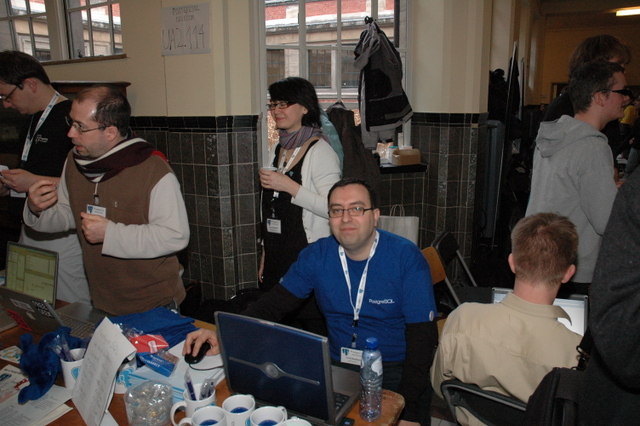 But we were also able to attract new people to join us this year: 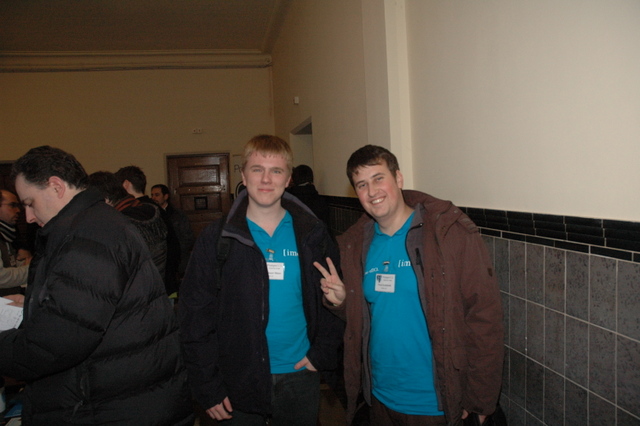 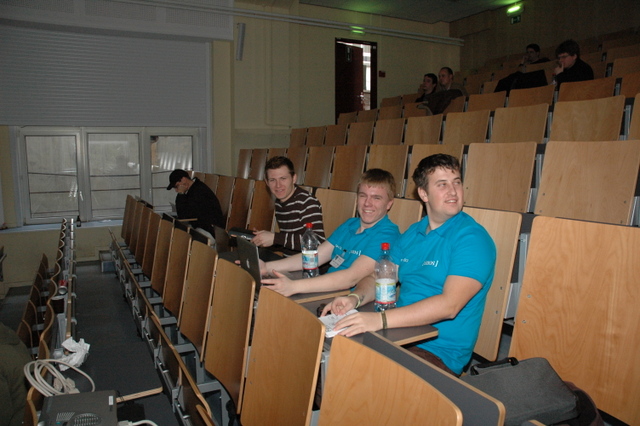 After preparing the booth we had to hurry up for the devroom - that's when the trouble started.  The projector did not work and the FOSDEM staff brought a new, portable one. This one had too little light for the big room, so most of the time we had the blinds down. I hope, the video camera was nonetheless able to record good videos.

In the two days we had many interesting talks and beside the fact that the devroom was several minutes away from the main buildings many of the talks was very well visited. I just want to mention Simons talk about ", replication, replication" which Selena already blogged about.

Saturday in the evening we went to a lebanese restaurant (Mont Liban restaurant) just around the corner from our hotel. The dinner was superb and Simon & Peter enjoyed the belly dancer ;-) 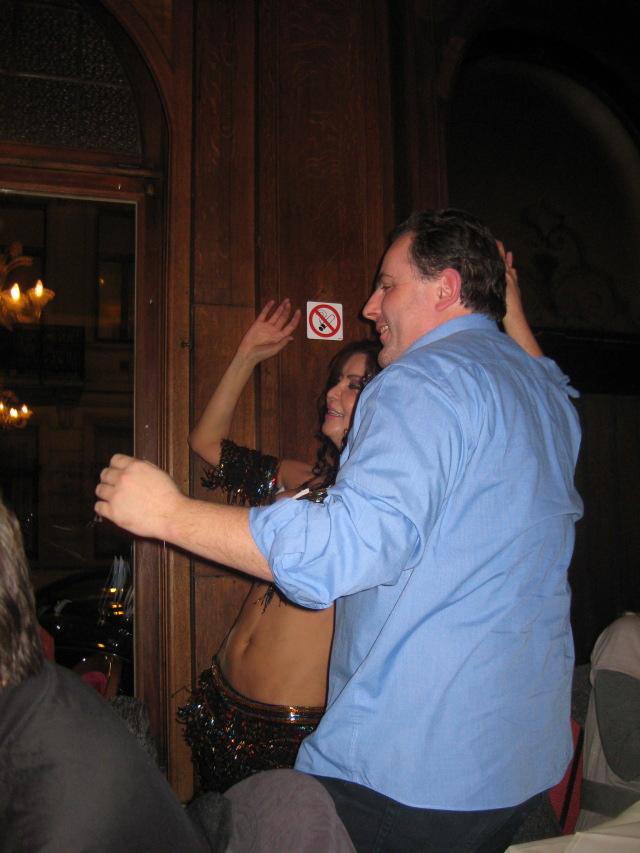 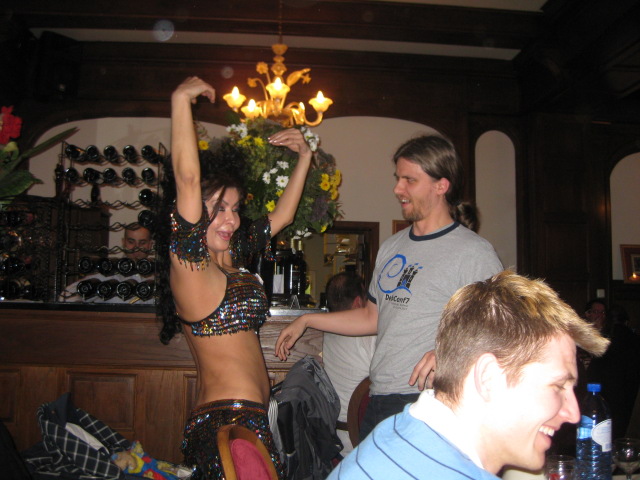 Thanks to Patryk for providing the evidence.

The music for the dancer was very (very!) loud. The waiter asked me before, if they can start loud music (our son was sleeping in his buggy) but as soon as the music started i realised what he meant with "loud". But Pascal took the chance and was dancing in my arms too - pity i don't have pictures of this :-(

After dinner most of us went back to the hotel but some could'nt resist (or did not learn from last years experience ;-) ) and went for "just one beer" into a bar. I was told, the "one beer" lasted until 2:30 am and seduced to get a nap in the devroom next morning.

On sunday just before Heikki's talk we auctioned off the big blue elephant: 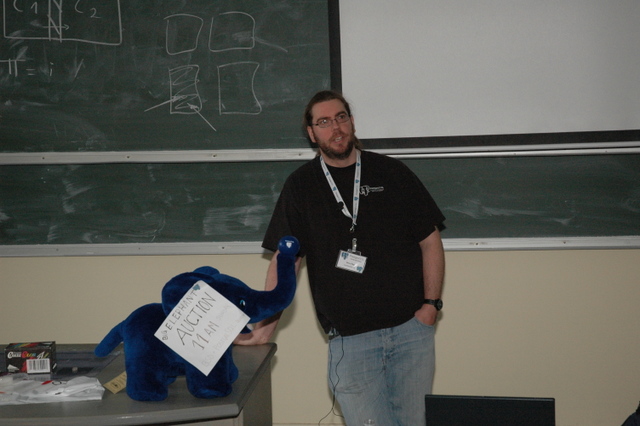 This girl was the lucky winner and proposed to give Slonik a new home: 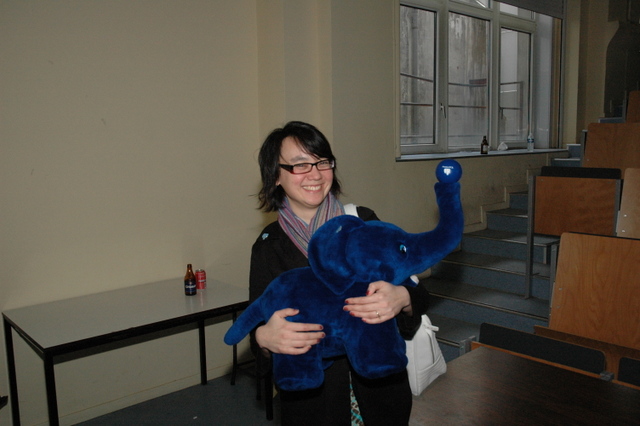 Conclusion: this years FOSDEM was very successfull. Just some notes for next year: we need more elephants and more mugs. Live CDs would be a good option too and we need to rework all the flyers we have. More notes are in the wiki.

Great pix, summary LiveCD FAIL!!!! We could, however, sell USB keys which would actually be useful beyond then next minor version update, which LiveCDs as CDs never are.
Comments ()
I would also love to have the USB sticks! But several people complained that a CD is a nice give-away where you have to sell the sticks (you won't give them away for free, or?).
Comments ()
Thanks for sharing the great photos, Ads :) You all ran a great booth this year! Many thanks to you, Suzanne, Magnus, Dave Page, Jean-Paul, Gevik, Stefan and all the others who contributed to make the booth awesome. I really enjoyed meeting you all, and seeing some of you again! Looking forward even more to PgCon this year! -selena
Comments ()
Thank you for swimming over the pod ;-) Hopefully we will meet again next year or maybe PGDay?
Comments ()
A CD is a nice giveaway for about the first minute. After that, it becomes hard-to-recycle rubbish :( As far as give-aways go, anybody who doesn't want to pay for a key is welcome to hit their OS's packaging system or our excellent on-line distribution network.
Comments ()
Thanks for sharing the pics Ads. One minor nit-pick - the elephant is called Slonik, not Slony. For those that care, in Russian Slony means elephants, Slon means elephant, and Slonik means little elephant.
Comments ()
Oh, my fault. Thanks Dave for pointing this out, i changed the name in the posting.
Comments ()
Where can I find a slonik to me?
Comments ()
I can send you one, but it's probably a bit expensive. Or you can bug your local user group to order a box with elephants ;-)
Comments ()