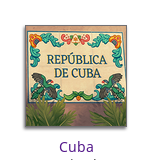 Geocaching in Cuba is not very common, which may be due to limited Internet offerings, and the partially poorly developed infrastructure. Most caches exist in and around major cities and well-known resorts (Havana, Cayo Santa María, Guardalavaca, Cardenas, Pinar del Río). There are also some caches in and around Guantánamo Bay, but these can only be reached from the local Naval Base. Not for tourists ...

We did plan this vacation around three basic parameters:

Everything else we've seen, visited, and experienced is a nice add-on.

As described yesterday, we had to slightly change the #PGBackPacking plan. Originally we had planned to hike to Monte Cristo, and from there to Silver Lake. Stay at the lake over night, and do a day hike to Twin Lakes.

At some point last year, Joshua and I discussed a backpacking trip. The idea of #PGBackPacking was born!

After considering our options, the available days and the physical fitness of our team members, we settled with an old ghost town about 60 km east of Everett: Monte Cristo.

Originally we had plans to go to Vancouver BC from Seattle, but we cancelled this part in the last moment. Instead we opted for a countryside tour to Bellingham, and staying an additional day in the hotel and at the pool. From Redmong we followed the WA-9 and left it near Everett, where we followed the Marine Dr along the coast. In Conway we switched over to the Fir Island Rd heading west, and from there on the Best Rd heading north. Eventually this got us on the scenic WA State Route 11, which leads directly into Bellingham.

After being on the road for almost a week now, Portland was supposed to be restful. Of course it ended up in walking around 13+ kilometers, finding Starbucks shops, a few Geocaches and a huge number Ingress portals ;-)

Mount St. Helens the day before was certainly one of the highlights of this vacation. We are determined to see the mountain again today, but not that close. And we had a different agenda for today: visit the Ape Cave, a famous lava tube just south of Mount St. Helens. Originally we planned to go all the way to the Windy Ridge Viewpoint, but given that it is a 3 hours drive from Vancouver, WA (where we stayed over night), we skipped this part and decided to spend more time at the Cave site. Totally worth it!

Getting some rest in Olympia was good, but the kid couldn't sit still any longer - Mount St. Helens was finally on! If you ask the kid, it can probably tell you more about volcanos in general, and particularly this one than you might ever learn in a lifetime. Therefore visiting Mount St. Helens was supposed to be one of the highlights of this vacation.

Going to Washington (State), Andrea asked if we can visit the places where the Twilight novels take place. Basically Port Angeles, Forks, La Push and Olympia. That's too much for one day, so we settled on a roundtrip around the Olympic National Park for one day, and Olympia for another day. That is also the reason why we travelled to Bremerton the day before: just to shorten the trip for today.